In times of honor, character is doing the right thing when no one is looking. We live, however, in radically degenerate times, and in the current year, character is now doing the right thing when EVERYONE is looking. In defiance of the ongoing mass corruption and degeneracy, Identitarians stood together on Pier 14 in San Francisco at the exact location where a woman was murdered by an illegal foreign national several months ago. Her killer, Juan Francisco Lopez-Sanchez, had been deported to his nation of origin on 5 separate occasions. The prevailing anarcho-tyranny , a system where capitalists ensure laws easily enforced remain disregarded through political campaign financing, continues to mount casualties across the nation and throughout The West.

Such a political system as this is upheld through the employment of thought terrorism against the European majority by corporate America. Individuals who publicly critique the system of mass immigration are tarred as xenophobes, or worse, racists. Once labeled, the corporate oligopoly is capable of economically destroying dissenters, ensuring that the flow of legal as well as illegal immigrants that fuel their slave labor quotas remains unhindered. Those who are aware and remain silent, or whose minds are simply too polluted with Cultural Marxist propaganda, are rewarded with the increasing costs of housing, dysfunctional multicultural communities, massive student loan debts, overcrowded cities and neighborhoods, mass depression, a collapsing middle class, broken families, and destruction of the biosphere through the mass consumption required to fuel global overpopulation. Even those in the tech industry who believed their jobs were secure are now finding them outsourced to legal modern day slaves in the form of H-1b visas. Only those in power remain relatively unaffected in their pasty-white country clubs that act essentially as micro ethno-states for the opulent. 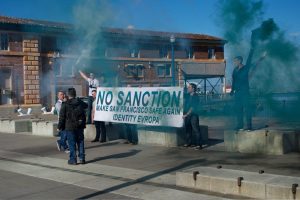 Identity Evropa is challenging this paradigm. We are calling out the hypocrites and cowards for what they are. The system’s structure is frail and the cracks have turned into gaping holes, as it’s false premise sinks further into the quagmire of reality. Pieces of paper now create such mass hysteria that tens of millions of dollars are diverted to appease the diversity coalition imported by the system itself, lest they create such chaos that this very system becomes dysfunctional and flaccid. The anti-white agenda, once set in place, was inevitably doomed for failure. Humans are not universally interchangeable creatures that can be mixed together at a whim and expected to function harmoniously. We as a species strive for purpose and meaning. We seek community that can only emerge through a shared commonality and history. We have identities that shape our perceptions and inform us of our worldviews. No matter how hard we seek to change others and remake them after our own image, only we will ever be us.

On Pier 14 we made known our contempt for those responsible for this tragedy. Many passed in silence, their apathy at the root of their own dispossession. Others cussed and frothed at the mouth, but remained woefully silent when their words held no weight against physically and intellectually superior men. A few amongst the crowd stopped and took note of our message, looking to discover whom these brave men were who stood in open defiance. Several others, emboldened by our defiance, clapped and cheered along with us. 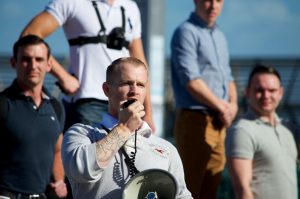 It is time for those who have broken into our lands to go home. We are not heartless, but we are not fools either. The language of our system has been crafted to promote, and even morally justify in the minds of these invaders, the displacement of our people. The incentives for such immigration must be put to an end, but this will only be done through direct action and civil disobedience. We must become increasingly and intolerantly belligerent to the point where the system itself cannot function. It has dehumanized us and delegitimized our interests to the point where we have no other options. We therefore must smash this system through creating social chaos knowing that the power to destroy something is the power to control it. Only by accelerating the ongoing disorder will a critical junction emerge creating the possibility for an alternative history by which we can we reclaim our destiny as a people with our future in the stars.

Those who have come to the West have a different path to tread. A separate destiny that is no less meaningful to them than is our own. They have lands, where their people suffer because their disaffected cognitive elite escape their duty through emigration, leaving their people behind to suffer dishonest and corrupt men who lead their people to ruin. To encourage such behavior is to become complicit in it. It is time for an new evolution of humanitarian thought; a rejection of the slave morality that promotes weakness, poverty, and suffering…….and is thereby only capable of multiplying it. We must reject such false consciousness, and in turn replace it with the confidence to achieve self-empowerment.

Monday’s demonstration was the first of many to come. Some have asked what our actions have accomplished; the system is still in place and the city council has ignored us. This is but a lack of understanding for the process of action to achieve power. Action requires and inspires more action, and action itself comes in many forms. It emerges in overreactions by our detractors and inspiration to our friends and allies to take part in future insurgent cultural strikes. It comes in the form of new sustaining donors who make future deployments not only possible, but larger and more frequent. Name recognition associated with professionalism is acquired with the general public, smashing the false anti-white stereotypes. Action opposes stagnation, and we must be in constant movement if we are as a movement to not simply survive, but thrive.

Our demo was short lived as planned, but served its purpose. At this point we cannot hold ground that we have temporarily captured and must tactically retreat once the shock of our insertion has worn off. Like the guerrilla fighters of countless low-level conflicts, we must surprise and demoralize the enemy, never providing them the opportunity to mount a counteroffensive. We must sap their energy and demoralize their ranks, only confronting them head on once we have achieved critical mass and it is too late for the opposition to thwart our advance.

The men who stood at Pier 14 in protest of the ongoing state imposed anarchy in San Francisco are men of action with uncompromising moral character. They stood together as brothers against the repression of corporate power that can and will make their lives unsustainable if possible, and against the anarchists who use corporate power as a tool to further their disorder. The symbiosis between the two can and must be broken, but will only be done when we shed ourselves of the fear that has created our paralysis and unabashedly advocate for truth and order.